What is a brain cyst?

A brain cyst is a spherical growth located in the brain. The globe is usually filled with cerebrospinal fluid. However, some cysts may contain blood, pus, hair follicles, or skin cells. Generally, cystic formations are not considered tumours and are usually not cancerous. 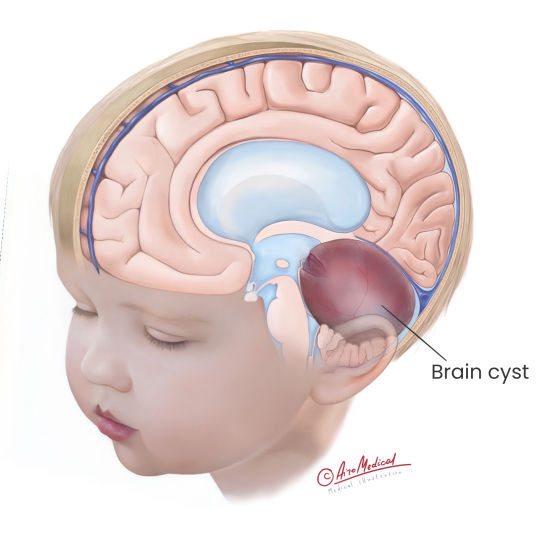 Cysts can be of various types and are classified according to the site of origin and the material they contain. The most common are listed below:

Risk factors for most cystic formations in the brain are unknown. It is believed that most neoplasms are caused by intrauterine malformations and may be hereditary. Cysts can also be caused by traumatic brain injury. Hormonal changes may be the cause of the development of a pineal cyst. The reason for such change are injuries, various diseases, infections and other diseases.

Symptoms usually depend on where in the brain the cyst grows. Some cysts are "silent" (cause no symptoms) until they become sizable. In some cases, the patient may have problems related to the area of ​​the brain where the cyst is enlarging. In other cases, symptoms may be related to a blockage in the normal flow of cerebrospinal fluid, which cause increased brain pressure (intracranial pressure). For each person, symptoms may be different, but often, they include:

Very often, cystic formations are discovered by chance during an examination made for another reason. Neurological or neurosurgical examinations begin with a history and physical assessment. The neurologist may also ask about the family's medical history. Next, a physician may perform imaging tests to check the brain. Contrast dye is often used to show more detail in images. Tests may include:

Most cystic formations can be observed clinically without any treatment. However, there are cases when the cyst grows, and its treatment becomes critical. Since a cystic mass is usually a sac filled with fluid, the treatment goal is to remove the liquid and the membrane. The important is to remove the walls of the cyst, to prevent further filling in. This procedure reduces pressure and relieves symptoms.

Treatment is regulated by the location, size, and type of cyst. For instance, people with a small brain cyst that does not change or cause pressure on the brain may not need surgery. Instead, neurosurgeons can monitor the enlargement of the mass with routine imaging techniques.

Surgery is recommended for patients to alleviate symptoms and prevent neurological damage. Surgical removal is usually performed with a craniotomy.

Based on the type, size and location of the cyst, new procedures and methods are being developed and proposed:

Generally, most brain cysts are benign and do not require surgical removal. However, the neurosurgeon will select and offer the best option if a surgical approach is needed for specific indicators.

Many brain growths are congenital, but sometimes they can indicate an underlying medical condition such as cancer or infection. However, most people with cysts have a good prognosis with complete surgical removal. And AiroMedical specialists will help you choose the best treatment tactics.

The National Institutes of Health (NIH) laboratories conduct a lot of research on brain abnormalities and nervous system disorders. In particular, the causes of arachnoid cysts and their impact on the human condition, including on children, are being investigated.

Observation has shown that approximately 1% of children with blunt head trauma develop arachnoid cysts. In 35%, the cyst causes signs of altered mental status (drowsiness, slow response, repetitive questions); 50% have headaches; 24% note the presence of vomiting; 37% have a history of loss of consciousness.

If not treated, arachnoid cysts can cause irreversible severe neurological damage when the cyst expands or bleeds damaging the brain or spinal cord. Symptoms usually disappear or improve with treatment.