What is a brain tumour?

A brain tumour occurs when cells begin to grow abnormally and form a mass. A difference between a benign tumour and cancer is that the tumour grows relatively slowly in the brain.

Benign neoplasms of the brain tend to stay in one place and do not spread. Therefore, it usually does not return if the doctor removes the entire tumour during surgery. 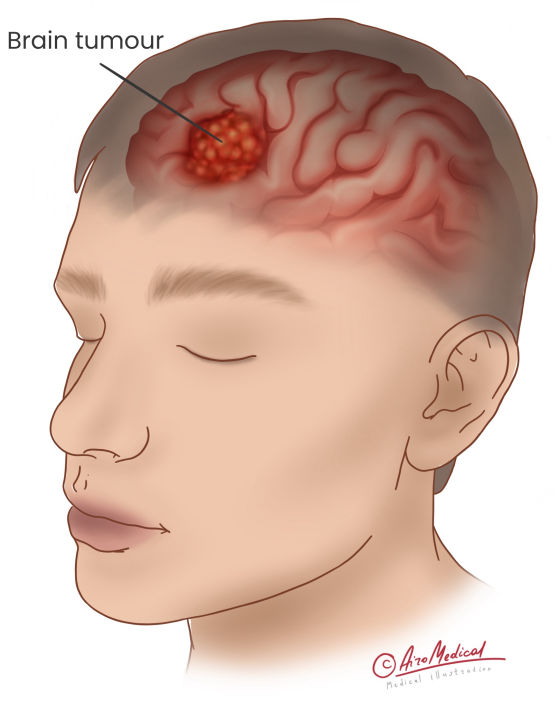 There are more than 100 types of tumours, each with its spectrum of manifestations, treatments, and outcomes. The difference between types depends on the type of cells from which they develop.

The most common types:

Approximately 71% of all brain tumours are benign. However, 58% of formations are diagnosed in women and 42% in men. The median age at diagnosis is 61 years. The survival rate for all patients with a primary brain tumour is 75.7%.

The symptoms of a benign brain lump depend on its size and localization. Some slow-growing neoplasms may not cause any symptoms at the beginning.

Most neoplasms are diagnosed by a general practitioner or neurologist after the onset of symptoms. The doctor may prescribe additional tests to assess the neoplasm's growth rate and spread to other body structures.

All the information obtained from testing helps the doctor plan treatment and adapt it to a specific disease.

The goal of treatment may be to entirely remove the tumour, slow its growth, or relieve symptoms by shrinking it. Very often, the only necessary treatment is surgery.

Complete tumour removal - total resection or partial removal can be achieved with neurosurgery. Partial resection may be indicated in cases where the neoplasm is located near large blood vessels or important brain parts. The smallest damage can lead to paralysis or blindness.

For brain neoplasms, the following types of neurosurgical operations are used:

If it is impossible to remove the entire tumour, further treatment will be required. In addition, sometimes, the operation cannot be performed because the neoplasm is located in a place inaccessible to the surgeon or is close to vital structures. Such neoplasms are inoperable and unresectable, and their treatment requires new or alternative methods.

The survival time after a brain neoplasm diagnosis depends on the patient's age, the type and extent of the tumour, and the symptoms present. However, the chances of survival have gradually improved over the past 30 years.

Understanding statistics, the AiroMedical team is ready to provide all necessary information for patients to understand the importance of treating a brain lump as soon as possible.