What is cervical cancer? 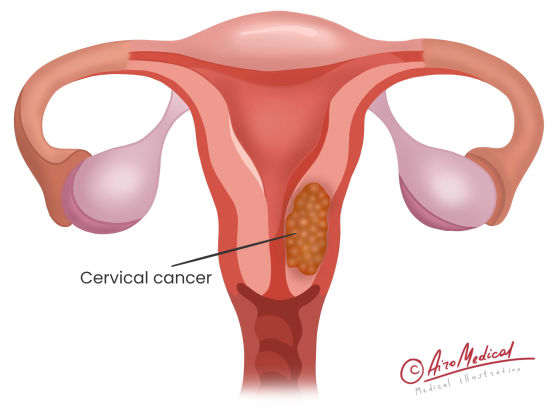 There are two main types of cervical cancer:

Most cervical cancers are caused by human papillomavirus (HPV) infection, which a vaccine can prevent. Cervical cancer grows slowly, so there is usually time to diagnose and treat it before it causes serious problems. Most often suffer from women from 35 to 44 years. However, more than 15% of new cases occur in women over 65, especially those who have not received regular examinations.

The early stages of cervical cancer are usually asymptomatic and difficult to detect. The first signs often appear after a few years. Finding abnormal cells during cervical screening is best to avoid this cancer.

An essential point for prompt diagnosis is screening - also known as smear analysis. Screening identifies pre-cancer changes or early cancer before signs and symptoms appear. The general goals of cancer screening are as follows:

Symptoms of cervical cancer may include:

Women may not feel the pain in the early stages of the disease. However, as cancer progresses and spreads to nearby tissues and organs, women may experience pelvic pain or urinary problems. In addition, some feel a general malaise, tiredness, or decreased appetite. These signs are not necessarily a symptom of cervical cancer, but it is essential to check for them.

The recommended treatment for cervical cancer depends on many factors, including the stage of the disease, age, and the desire to have children in the future. Treatment options may include the following methods:

Early detection of cervical cancer allows more treatment options. When drawing up a treatment plan, the doctors will consider and advise the patient on how the disease and treatment methods will affect sexual function and the ability to have children and other aspects.

Researchers worldwide actively seek more effective methods of preventing and treating cervical cancer. Some of the promising new developments include the following:

Cervical cancer is a slowly progressive but life-threatening disease. However, the emergence and application of modern treatment methods mean that the patient has a better chance of recovery and life extension.

According to the World Health Organization, cervical cancer is women's fourth most common cancer. In 2021, it accounted for more than 600,000 new diagnoses and more than 350,000 deaths worldwide. Not so long ago, the diagnosis of cervical cancer was the leading cause of death for women worldwide. But significant research in screening, diagnosis and treatment has reversed this unfortunate trend.

Cervix cancer is ​​curable! The effectiveness of cancer treatment depends on many factors, including the stage, type, and location of cancer. According to studies, only 10-15% of people with early-stage cervical cancer relapse after treatment. In addition, cervical cancer is preventable. However, it requires regular examinations.

Suppose you or your relatives are diagnosed with cervical cancer. In that case, the most important thing is to find a team of professionals to discuss the treatment plan and help you choose the best option for a speedy recovery. Like any other problem, cancer is only a problem if you haven't found a good answer or solution yet!