What is a pituitary gland tumour?

The pituitary gland is a tiny, pea-sized organ located behind the bridge of the nose and next to the brain. It is an organ of the endocrine system responsible for regulating levels of hormones in the body. The gland is also called the "master endocrine gland" because it secretes hormones that control other glands in the body and influence many body functions. 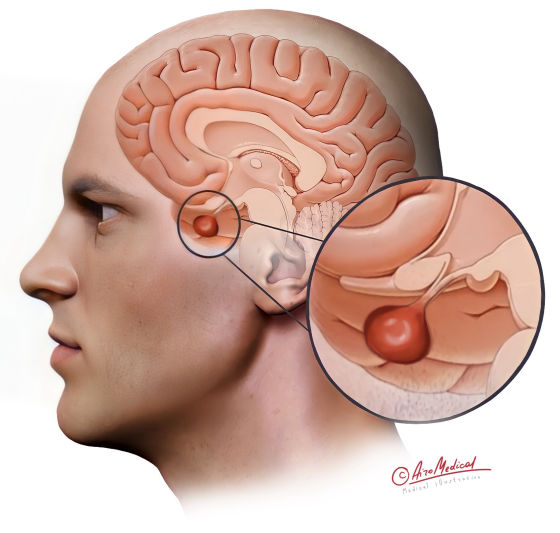 A pituitary gland tumour is an abnormal enlargement of pituitary cells. Because of the disease, the gland produces too little or too much hormone, causing many endocrine problems in the body.

The main types of tumours are as follows:

Most pituitary growths do not cause symptoms. As a result, they are not diagnosed in the early stages and usually are found during a brain scan. About 25% of people may have small pituitary tumours without knowing it.

Most often, the disease is diagnosed in older people, but it can also occur at any age. When analyzing brain formation at the age of 15 to 19, 33% will be the probability of pituitary gland neoplasm. By gender, women are more likely to develop these tumours than men.

Symptoms depend on the damaged area of ​​the pituitary gland and may vary from person to person. In addition, the signs of the disease may also look like other health problems. They include:

There are a large number of tests to diagnose a pituitary tumour. In addition to visual examination, the following methods can be used.

Early intervention offers the best chance of curing or controlling the disease and its side effects. For patients with a pituitary tumour, the following standard treatments are available:

Some types of treatment are considered standard, as they have been used in medical practice for a long time. And some varieties are undergoing clinical trials and, through their approval, are also being introduced into the method of treating oncological diseases. It includes:

Doctors continue to work to learn more about pituitary growths, how to prevent them, how best to treat them, and how to provide the best care for affected people.

The actual number of pituitary neoplasm can be much higher than the number of tumours detected each year. When examining people (postmortem autopsy) or imaging studies (such as an MRI scan) of the brain, doctors have found that 1 in 4 people may have a pituitary adenoma without knowing it. These tumours are often small and never cause any symptoms or health problems, so very few of them are usually diagnosed at all.

Comprehensive studies on the incidence and prognosis of pituitary tumours are still insufficient. Analyzing all pituitary adenomas registered in the surveillance, epidemiology and end results (SEER) database from 2004 to 2016 in the United States is even more interesting. Among all patients diagnosed with a tumour in the pituitary gland, 73% were between 19 and 64 years. 45% of patients underwent surgical resection, and the majority (94%) received surgery as their only treatment. In addition, 4% received radiation therapy. The overall incidence rate was 4.8 cases per 100,000 people, and most patients were female - 56%. Overall survival at 3, 5, and 10 years was 94.3%, 91.3%, and 83.1%.

The health of the brain is the health of the body. If you or a family member is experiencing symptoms of cognitive impairment, don't hesitate to get in touch with the AiroMedical team for personalized treatment. You can share your problems and get an individual strategy online with one click.