What is ovarian cancer?

The ovaries are a paired organ of the female reproductive system. They are almond-shaped, located on both sides of the uterus, and responsible for producing eggs and hormones. Ovarian cancer is an overgrowth of malignant cells that make up the ovaries. Cells multiply and penetrate neighbouring organs. 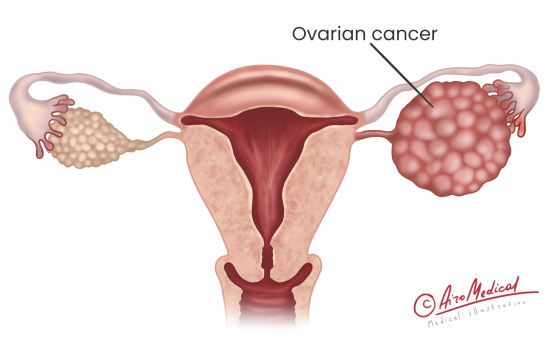 Ovarian cancer is the most lethal gynaecological cancer. Less than half of patients survive more than five years after diagnosis. Ovarian cancer affects women of all ages but is often diagnosed after menopause. More than 75% of affected women are diagnosed late because the early-stage disease is usually asymptomatic, and the late-stage symptoms are nonspecific.

The symptoms of ovarian cancer, especially in the early stages, are very vague. Most often, signs appear when the disease has already spread. Symptoms include:

The first action is to have a gynaecological examination, which usually involves a pelvic exam. Next, the doctor inserts two fingers into the vagina and presses on the abdomen with the other hand. Thus, consolidations can be detected. If ovarian cancer is suspected, the oncologist-gynaecologist will prescribe additional tests:

The tests will make an accurate diagnosis and help determine the type and size of the tumour and whether the tumour has spread to other organs.

There are several types of treatment for ovarian cancer. Since each case is unique, different treatments may exist, even for the same kind of cancer. In addition, cancer treatments may be used alone or in combination. Doctors will recommend the best treatment based on the type and stage, genetic makeup, age and general health.

The treatment can be difficult or even impossible when diagnosing advanced ovarian cancer. In this case, the team of doctors is faced with limiting cancer growth and its symptoms, prolonging and improving the quality of life.

Despite optimising treatment protocols and clinical trials, there have been only modest successes in improving survival. Therefore, ovarian cancer remains the most severe gynaecological malignancy. The latest advances in the origin, diagnosis and treatment of ovarian cancer are essential for patients. New therapies for ovarian cancer include:

Thanks to the methods described above, significant advances have been made in treating ovarian cancer. Moreover, it brings hope and improved outcomes for many women, even in the terminal stages.

Ovarian cancer is the second most common gynaecological cancer in the world. The disease causes more deaths than any other female reproductive system cancer. Although the risk is only 1.5% of the total population, it is the fifth leading cause of cancer death in women, as 60% of women with ovarian cancer have metastatic disease.

So what's next for women diagnosed with ovarian cancer? The latest developments and combination therapy are the near future for the treatment. Our patients receive qualified assistance and a combination of different methods, which shows significant effectiveness.

If you or your relatives are diagnosed with ovarian cancer, the most important thing is to find a team of professionals as soon as possible. Like any other problem, Ovarian cancer is only a problem if you have not yet seen the correct answer or solution! For information on accessing the latest treatments, please get support from the AiroMedical team.