What is high-intensity focused ultrasound? 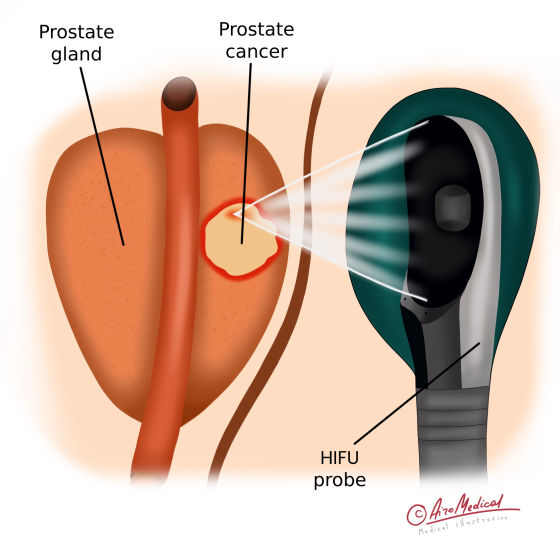 High-intensity focused ultrasound (HIFU) is a "minimally invasive method" (without incisions) that uses ultrasonic waves to treat prostate cancer. During the HIFU procedure, ultrasonic waves are produced with higher intensity and in a highly focused form. As a result, cancer cells are destroyed under ultrasonic waves in a particular zone with high accuracy.

This method treats a tumour that has not spread beyond the prostate. HIFU is also used after other treatments or radiation therapy, which did not help.

A detailed description of the approach for prostate cancer

Have you ever used a magnifying glass to reflect the sun's rays and kindle fire or burn a hole on a sheet? If so, you know how HIFU works. In this case, sound waves focus on the tissue area that requires treatment. Ultrasonic rays can pass through tissue layers, leaving them unchanged until they reach the target point - a cancer lesion. 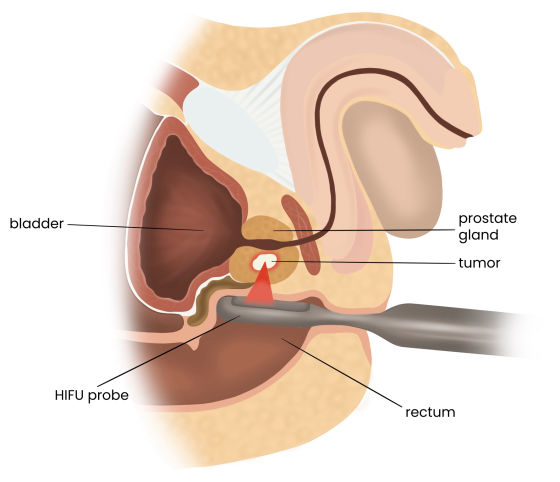 The HIFU procedure is performed with general anaesthesia. First, an ultrasonic sensor is inserted into the patient's body through the rectum, simultaneously used to visualize and treat the tumour. Next, the waves heat the tissues to 90 C and kill a small portion of cancer cells just in a few seconds during the treatment process. Finally, the ablation zone is created by conducting several procedures to cover a given area defined by previous studies.

Clinical trials of high-intensity focused ultrasound for the treatment of prostate cancer began in the 1990s in Europe, the United States and Japan. During this time, HIFU has demonstrated safety and effectiveness through accurate destruction of local tissue and was approved by the US Food and Drug Administration for ablation (destruction) of cancer cells.

The advantages of high-intensity focused ultrasound treatment for prostate cancer include:

Long-term (10 years) studies conducted by German and French medical centres have informative results for using high-intensity focused ultrasound in prostate cancer treatment. After HIFU treatment and depending on cancer risk, the survival rate after 10 years is 92% to 99%. In the comparison model, the survival rate in combined therapy for 4 years in HIFU - was 99%, and in radiotherapy - it was 91%.

Also, in the French journal European Urology, a study conducted by the French Urological Association has shown that after the HIFU treatment, urinary continence is preserved in more than 97% of patients, the absence of clinical cancer in 95% and the preservation of erectile function in more than 87% of patients.

HIFU will undoubtedly remain one of the leading technologies used in focal therapy for prostate cancer treatment.