Proton therapy - is a radiation therapy used to treat cancer with powerful energy. Radiation therapy, which uses X-rays, has been known for a long time. However, proton therapy is a new type that uses protons' energy - positively charged particles. The high energy of these particles can destroy cancer cells.

Proton therapy is external. Energy is painlessly delivered to the tumour focus from special equipment located outside the body.

A detailed description of the treatment 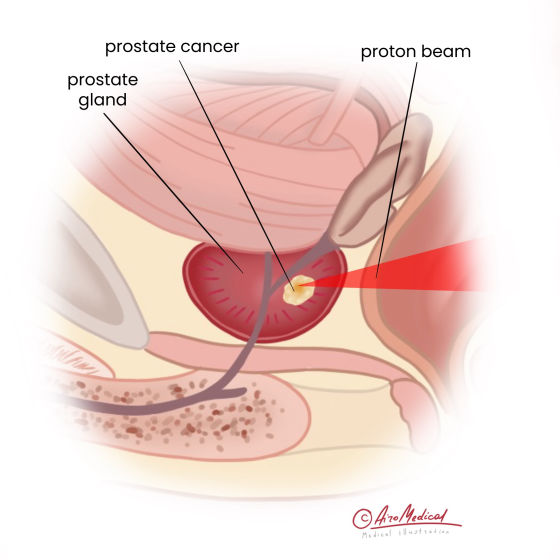 Proton therapy for prostate cancer - is a treatment option that includes using a focused beam of proton particles to destroy cancer tissues. Treatment can deliver accurate high doses of radiation controlled by a doctor to target cancer cells without causing damage to the tissues surrounding the prostate and which do not require treatment.

A machine accelerates protons called a synchrotron or cyclotron, and their high speed creates high energy. This energy causes protons to move to the desired depth in the body. Then the charged particles give a target dose of radiation to tumour cells. The radiation dose is lower when using this therapy method outside the tumour.

Proton radiation therapy is carried out outpatient in a particular room. The patient is placed on a unique treatment table, on which there are special pillows and limiters to determine the best position for the patient. During the irradiation procedure, the patient lies motionless.

The proton beam is directed with magnets to a certain point in the body, hitting the sick cells as far as possible without affecting neighbouring healthy organs.

Advantages of the therapy in prostate cancer treatment

Proton radiation therapy has many advantages over other treatment methods, such as:

Proton radiation therapy is considered one of the most advanced forms of treatment available in modern medicine. In the world's developed markets, about 40% of cancers (more than 60% in the United States) require radiation therapy separately or combined with other treatments, such as prostatectomy or chemotherapy. Minimizing the impact of rays on healthy tissues has always been the most crucial aspect, and proton therapy has a real advantage over other forms of radiation therapy treatment.

Awareness in the medical community about proton radiation therapy is growing every day as more patients receive this type of treatment. Over the past year alone, more than 1,000 articles with clinical trial results have been published over the past year.

﻿In an MD Anderson article published in the Green Journal, five-year clinical trials of patients treated with proton therapy show that life expectancy increased by 41%, biochemical indicators have improved by 87%, and the risk of recurrence has decreased by 92%.