What is stomach cancer? 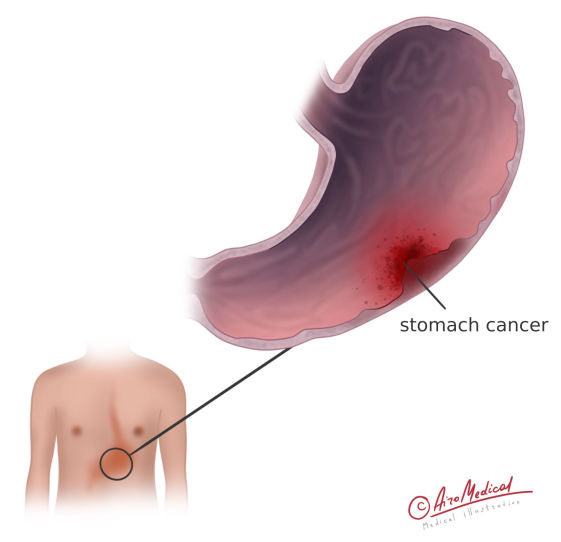 The stomach is the digestive system organ located in the upper abdomen. Stomach cancer is a condition of abnormal and uncontrolled growth of stomach cells displacing normal cells. Gastric cancer cells can extend to other body parts, such as the liver. This expansion of cancer cells is called metastasis. There are many types of stomach cancer, but the leading and most common types are as follows:

Stomach cancer is the sixth most common cancer form and the third most mortality. Even though gastric cancer is usually diagnosed at a late stage, there are a large number of treatments.

Signs of stomach cancer can be invisible, such as stomach disorders and difficulty swallowing. As the disease progresses, the number of symptoms increases and may include:

Most of the symptoms may signal other digestive system diseases, but the presence of such problems requires seeing a doctor, diagnosis, and further treatment. The gastroenterologist will study the medical history, and the presence of symptoms, conduct a visual examination and possibly prescribe additional tests:

The diagnosis will determine the presence and type of stomach cancer. Detection of the disease at the initial stage and advanced treatments prolong life and improve the chances of survival.

Treatment of stomach cancer is determined by the stage of the disease, the severity of symptoms, and the general health condition. Options include:

The treatment depends entirely on where the cancer is located, how large it is, whether it has spread to other organs, etc. Then, doctors in the multidisciplinary team select the best treatment and supportive care.

Surgery is the best treatment method for stomach cancer in case of early detection. Surgical treatment is also considered in conjunction with chemotherapy and/or radiation therapy. In the case of advanced gastric cancer, treatment aims to stabilize the disease progression and improve life expectancy. Scientists and researchers worldwide strive to develop new promising treatment options for stomach cancer.

No matter how frightening the diagnosis of stomach cancer is, you need to know that a team of professionals can provide comprehensive treatment options and assistance at each stage. In addition, only experienced specialists can develop an interdisciplinary approach to eliminating the tumour and destroying any residual cancer cells.

Treatment prospects and survival rate in stomach cancer depend on its stage and spread at diagnosis. While stomach cancer is well treated at the initial stage, the disease is associated with lower survival at advanced stages. The excellent news in diagnosing stomach cancer is that now doctors detect neoplasms in the stomach earlier than ever before. It means that there are more hopes to fight oncology.

The National Cancer Institute differentiates survival rates in stomach cancer into four separate groups, depending on the stage. Below is a five-year prognosis for patients with stomach cancer. When the cancer is localized only in the stomach (stage I), the 5-year survival rate is almost 70%. Cancer diagnosed at stage II shows a survival rate of 35%, stage III - 25%, and IV - survival rate is close to 0%. Unfortunately, there are no statistics on 5-year survival in stage 4 cancer. It is because, unfortunately, most people do not live so long after diagnosis. At the same time, it should be noted that these statistics do not take into account what treatment patients received.

There is no exact way to prevent stomach cancer. Therefore, various research institutes conduct many studies to permanently change the negative stomach cancer statistics, aiming to cure more people and save more lives.