What is high-intensity focused ultrasound?

High-intensity Focused Ultrasound (HIFU) is a new method of non-invasive ablation that can be used to remove various solid tumours, including primary and secondary liver cancer. Ultrasound energy is focused on tumour foci and causes coagulation necrosis (destruction) of the tumour due to thermal exposure.

HIFU is a relatively new method that provides non-invasive ablation of tumours. Under the control of magnetic resonance imaging (MRI) or diagnostic ultrasound (ultrasound), the ultrasonic beam generated by a power converter can be directed to the target tissue at the selected depth, which leads to a rapid local increase in temperature (65-85°C), destroys cells without damaging the surrounding tissues.

The main advantage of HIFU compared to other traditional thermal ablation methods is low trauma, which avoids the risk of bleeding or other side effects.

A detailed description of HIFU

Have you ever used a magnifying glass to reflect the sun's rays and kindle fire or burn a hole on a sheet? If so, you know how HIFU works. In a medical application, sound waves focus on the tissue area that requires treatment. Ultrasonic rays can pass through the tissue layers, leaving them unchanged until they reach the targeted area. 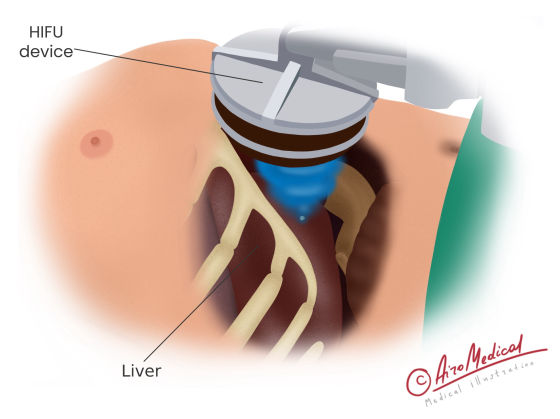 HIFU therapy for liver cancer is performed with general or local anaesthesia. This is because two biological actions occur in the body - thermal and non-thermal.

The duration of therapy depends on the size of the tumour and the state of the body. The treatment lasts 1-3 hours. The entire time with preparation and assessments is about 2-6 hours.

Clinical trials of high-intensity focused ultrasound for the treatment of liver cancer began in the 1990s in Europe, the United States and Japan. During this time, HIFU has demonstrated safety and effectiveness through accurate destruction of local tissue and was approved by US Food and Drugs Administration for ablation (destruction) of cancer cells.

Advantages of the technique

High-intensity focused ultrasound is a non-invasive method for liver cancer treatment. It expands the treatment range to inoperable tumours near large vessels, bladder ducts, or important organ structures. Larger vessels are not damaged by focused ultrasound, and the surrounding tissues are better preserved in HIFU than during surgery. In addition, a significant advantage of HIFU therapy in reducing the tumour for palliative purposes (to improve the quality of life).

The advantages of high-intensity focused ultrasound for liver cancer treatment include:

The ongoing studies considered the HIFU method for treating separately primary liver cancer and cancer which spreads to the liver (secondary liver cancer). In addition, clinical studies aimed to determine whether HIFU is useful in combination with other treatments for primary liver cancer. And to see if it helps control the symptoms of a progressive disease.

Researchers from the Journal of Cancer found that 79% of patients successfully undergo HIFU sessions (the tumour begins to decrease). The tumour is destroyed in 30% of cancer patients. HIFU therapy is recognized as an effective method of treating inoperable liver cancer. 44% of patients live more than five years if the cancer process is diagnosed at the 1st or 2nd stage.