During treatment with proton therapy, the task is to focus the beam of protons on the shape and size of the tumour. The beam kills tumour cells layer by layer while sparing the surrounding healthy tissues.

A detailed description of proton radiation 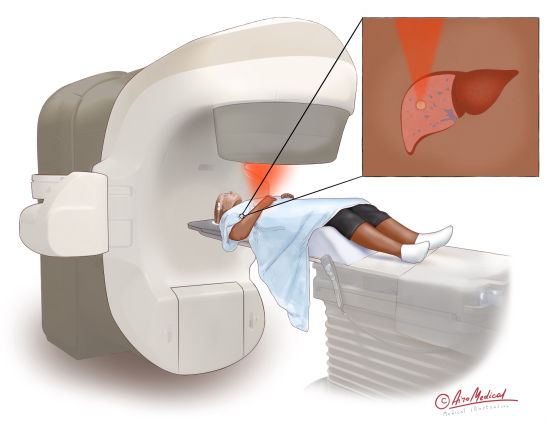 Proton therapy for liver cancer is carried out outpatient in a particular room. Before the procedure, visualization tests such as CT or MRI are carried out, which help obtain images of the tumour and surrounding tissues. Sometimes the doctor marks the body, indicating the treatment area. The proton therapy session lasts 15 to 30 minutes, and it depends on the location, size and number of the tumour.

The position of the patient's body is essential in proton therapy for liver tumours. Therefore, the treating team may take some time to adjust the optimal position and tools to achieve the exact position of a proton beam.

A large machine accelerates protons and creates energy. A beam of protons focuses this energy in the body precisely at the depth where the tumour is located. The proton portal can move around the patient to treat the tumour from several positions. Proton therapy for liver cancer treatment is a painless method. Therefore the patient does not feel the beam of proton that enters the body and affects the tumour.

Advantages of the treatment

Proton therapy is rightfully considered the newest and most advanced method of radiotherapy. Due to its advantages, this type of liver cancer treatment is suitable in a situation where treatment options are limited for several reasons. Here are the benefits of proton radiation therapy over other treatments:

The incidence of liver and intrahepatic bile duct tumours is growing faster than other cancers. Unfortunately, a small proportion of patients are suitable for surgical treatment due to medical or anatomical reasons, which leads to a low 5-year overall survival rate - of 18%. The role of proton radiation therapy has expanded significantly in this population of patients.