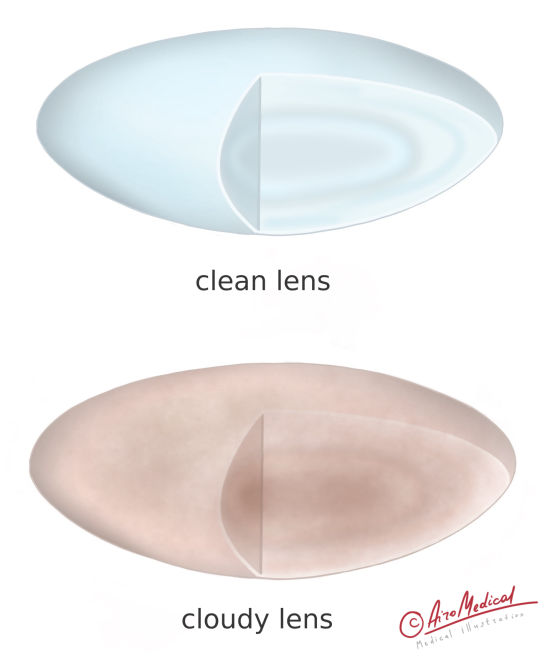 A cataract is a clouding or loss of transparency of the eye's natural lens. It is because the proteins contained in the lens are destroyed and stick together. Moreover, the disease eventually leads to vision loss and, in individual cases, blindness.

The condition affects one in six people over the age of 60. Lens damage is the most common cause of poor vision in the elderly and a cause of blindness worldwide.

Several reasons can cause the disease, but the most common is natural ageing. Cataracts can also develop after an injury or certain medications. However, seldom children might be born with congenital cataracts.

The most common type is formed mainly in the centre of the eye's lens- a nuclear cataract. Another type of cataract develops at the edge of the lens and is called a cortical cataract. Finally, a cataract that forms at the back of the lens is called a posterior capsular cataract.

The lens lesion develops rather slowly, and the early stages may not be noticeable. One of the reasons why people often don't realize they have a cataract is that the disease develops painlessly. As it progresses, the following symptoms appear:

An ophthalmologist can check for cataracts as part of a comprehensive eye exam. The examination is simple and easy, but additional procedures may be needed, such as:

An eye exam can help detect cataracts and other vision problems at their earliest stages. It is why regular check-ups with an ophthalmologist are so important.

The facts about cataracts are clear. Once the disease begins to develop, vision will gradually deteriorate. And a pleasant truth about cataracts is that it is possible to cure them and restore lost vision!

Changing glasses or contact lens prescriptions may be enough to help when the disease is just beginning. But because cataracts get worse with age, many people need more intense care.

There is no other way to cure or get rid of a cataract once it has formed than surgery. Unfortunately, no medicine can reverse the existing changes, and no glasses can completely neutralize their effects. Some ophthalmologists are looking for non-surgical solutions, but no other solution has been found at this time.

There are several types of cataract surgery, but they all have one similar thing: the clouded lens is removed and replaced with an artificial one.

There have been many advances in cataract surgery in recent years, including with the help of a laser and an instrument called intraoperative aberrometry (ORA), which takes a different eye measurement during surgery. It allows more accurate proportions of the synthetic lens used to replace the original lens.

Ophthalmologists do not leave hope for the medical treatment of cataracts. However, the study results on a revolutionary new treatment for cataracts have been published in the Investigative Ophthalmology and Visual Science journal. The oxysterol compound, which has been proposed as an anti-cataract drug, has been clinically tested.

People no longer have to live with vision loss due to cataracts. Thanks to new technological advances, cataract surgery today has become faster, more efficient and more comfortable for the patient. If an illness limits your daily activities, such as reading, driving, or watching TV, book a consultation with a specialist. AiroMedical is a guarantee of successful cataract surgery anywhere in the world.