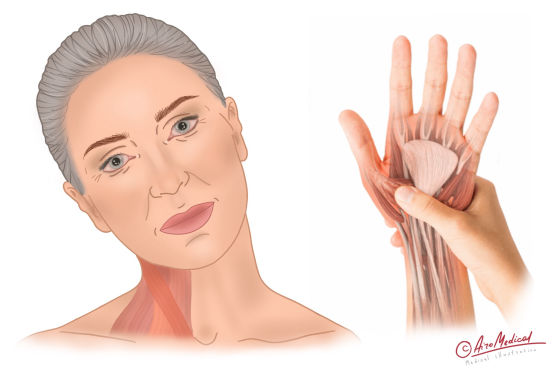 Dystonia is not a single illness but a syndrome - a set of symptoms that cannot be attributed to one cause since they have common elements. In addition, some forms may affect specific areas of the body, such as the neck, face, jaw, eyes, limbs, or vocal cords.

Dystonia is the third most common movement disorder after tremors and Parkinson's disease. The exact cause of dystonia is unknown but may involve changes in multiple brain areas or the connections between them.

Symptoms of dystonia can vary from very mild to severe. Dystonia can affect different body parts, and often the signs progress in stages. Some early symptoms include:

Currently, there are no tests to confirm the diagnosis of dystonia. Instead, the diagnosis is based on the physician's ability to observe symptoms and to take and analyze a patient history. In addition, the doctor may prescribe medical tests to rule out other conditions or disorders.

Dystonia is classified according to the parts of the body affected. It is focal dystonia if only one body part is affected, such as the eyes, neck, limb, or voice. In case a larger area is involved, such as the neck and arms, it is segmental dystonia. If the cramps affect the arm and leg on the same side, it is called hemidistonia. It is multifocal dystonia if two or more unrelated body parts are concerned. Finally, if the disease is more common, it is generalized dystonia.

There is no complete cure for dystonia, so treatment is aimed at relieving symptoms. Nowadays, traditional drug treatment is used: injection and oral drugs.

Along with drug treatments, specialists may recommend non-drug approaches. It includes physical and occupational therapy and speech or voice therapy. In addition, rehabilitation help achieve greater awareness and control over the body. The following rehabilitation methods are very effective:

Dystonic symptoms can seriously impair patients' quality of life, while the response of dystonia to oral medication can be disappointing. In this case, doctors may recommend surgery. In the treatment of dystonia, the following surgical operations are used:

New approaches to treating dystonia include gene therapy and transcranial magnetic stimulation. Gene therapy may be promising for patients with hereditary dystonia, which is thought to be involved in a specific gene. However, gene therapy for dystonia has not yet been tested in patients. Transcranial magnetic stimulation is also being inspected as a non-invasive stimulation for the treatment of dystonia. So far, it has only been studied in small controlled trials of focal dystonia of the hands or cervix. Research is ongoing.

Dystonia is dangerous for the lonely and depressive state of the patient. External symptoms can be a source of great embarrassment and frustration. The fact that there is no known cure exacerbates this issue. In addition, dystonia often leads to disability. The aim of the study, carried out by the Swedish Dystonic Patients' Association, was to identify factors in dystonia that affect the self-reported quality of life and health.

The greater the severity of dystonia, the worse life quality. Greater severity is associated with more significant disability. The pain was present in 84% of patients, causing disability in 41%. The most frequent complaints were: difficulties in fulfilling professional and personal requirements (74.3%), an embarrassment in public places (72.9%), depression, irritation and anger (47.1%), loneliness and isolation. (32.9%).

Living with this disease is extremely difficult. AiroMedical specialists treat many patients and are very well versed in the many manifestations of dystonia and the best diagnostic instruments to assess the problem. AiroMedical professionals will offer a wide treatment range for all forms of dystonia, including botulinum therapy, physical, occupational and speech therapy, and deep brain stimulation.