Bile Duct Cancer: About the Disease, Clinics and Treatments Options

A tumor of the bile ducts, or cholangiocarcinoma, is a rare and very aggressive malignant tumor. It's hard to fight because it is often diagnosed at late stages and is located in "uncomfortable" places, where it is complicated to remove surgically.

This disease is hazardous: it develops rapidly and is prone to metastasis. In addition, bile duct cancer is incurable at later stages, so early diagnosis is crucial.

What is the danger?

Bile duct cancer is a malignant neoplasm formed from mutated cells of the bile ducts. 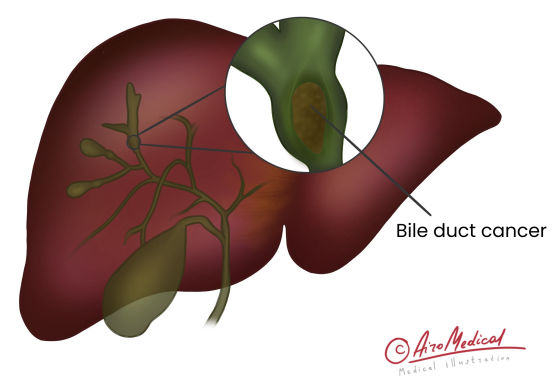 Bile ducts are small thin tubes through which bile flows from the liver and gallbladder into the small intestine. Bile is produced in the liver and stored in the gallbladder. The primary tumor can be located on any part of the bile ducts.

Most often, it develops in men 50-70 years old. The disease is more common in Asian countries, where parasitic liver pathologies are common. In total, 1-2 cases of bile duct tumors are registered per one hundred thousand people. On average, the incidence in Western Europe, North America, and Australasia range from 0.3 to 3.5 cases per 100.000 people per year. So, the prevalence in the USA is kept at the level of 8.000 instances, and in France, it is 2.000 new cases of bile duct cancer per year. The highest incidence rate was recorded in Thailand – 90 patients per 100.000 population, followed by China and Korea.

Since there are no symptoms for a long time, malignant neoplasms are often diagnosed at late stages. That is because the bile duct tumor has time to grow into the surrounding tissues, spread to the lymph nodes, and give distant metastases.

Unfortunately, despite many years of study, the causes of cell mutations are still unknown. Several factors can provoke bile duct cancer. Risk factors include:

Age is another group of risk factors. For example, it is known that people over the age of 65 have a higher chance of having cholangiocarcinoma.

To reduce the risks of bile duct cancer, experts recommend limiting alcohol consumption and exposure to hazardous chemicals. Also, when traveling to regions where parasitic diseases are common, it is important to drink only purified water and ensure that the food is heat treated.

The cancer cells may form in liver bile ducts where bile is produced. Liver ducts connect outside the liver to the common hepatic duct. Therefore, abnormal cells can appear in every area of ducts, either inside or outside the liver. The tumors can also be found in the cystic duct, which connects the gallbladder and common hepatic duct, forming the common bile duct, which enters the small intestine (in the ampulla of the duodenum). Bile duct tumor may be:

There is also a staging system for cholangiocarcinomas. Doctors use it to define whether the cancer is operable or is too late to perform the surgery. The stage of bile duct tumor depends on the following:

Based on histological type, the tumor of the liver duct can be adenocarcinoma, lymphoma, or small cell carcinoma. The majority of cases of the disease occur in adenocarcinomas.

Clinical signs of the disease have been absent for a long time. That makes it difficult to diagnose in the early stages.

The first syndrome becomes jaundice. It develops when the bile duct tumor becomes large enough to block the exit of bile into the intestine. Then it goes into the bloodstream, and bilirubin accumulates in it. Itching of the skin is noted, feces become discolored, and the urine becomes dark. Later, other symptoms appear:

The listed symptoms are not specific. They are often found in people who do not suffer from bile duct cancer but have another disease. But if any of them appear, you should consult a doctor as soon as possible. Only a full-fledged diagnosis will allow you to make the correct diagnosis.

The bile duct tumor can be detected using imaging techniques. Ultrasound is used for this. It is possible to see the expansion ducts in some places and identify a large neoplasm. This test becomes more informative when an ultrasound sensor is inserted into the duodenum or abdominal cavity (endoscopic ultrasound). Then a biopsy of the formation is performed under ultrasound control, and the diagnosis is confirmed by examination.

After receiving the diagnostic results, a consultation of doctors (oncologist, surgeon, hepatologist, gastroenterologist, radiologist, etc.) gathers. Together they select treatment methods taking into account the patient's condition. That allows them to avoid mistakes and choose the best therapy for the bile duct tumor. 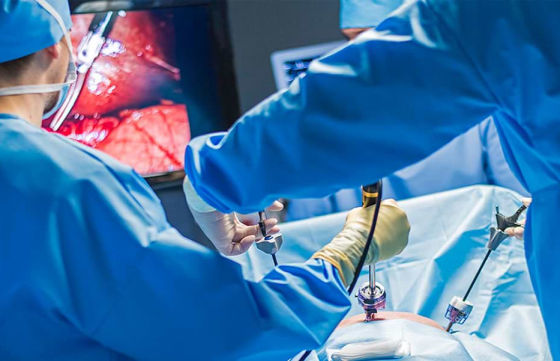 Bile duct cancer remains a "complex" oncological disease. The bile duct tumor is resistant to treatment, and many cases are incurable. However, patients need treatment to alleviate their symptoms. It is challenging to deal with because it is often diagnosed at late stages and is located in "uncomfortable" places where it is difficult to remove it surgically. In many patients, it becomes evident during surgery that removing the tumor is impossible.

The disease is rare, so it is not easy to study. Collecting the correct number of patients to evaluate statistics is often impossible. But in recent years, new diagnostic tools have been developed, surgical interventions have been improved, and new techniques and antitumor drugs have appeared.

Cholangiocarcinoma is an insidious disease. Only with the early detection of a bile duct tumor does a person have a chance of defeating the condition. In other cases, the methods of treatment used can increase life expectancy.

Thus, an early and highly accurate diagnosis is necessary to maximize survival.

The problems of bile duct cancer have prompted further research in this area. So new methods of treatment appeared:

The essential part of success is an appropriate treatment plan. The medical approach will depend on the type and stage of the illness, the age, and the general health of the patient.

There are the following treatment options for the bile duct tumor:

They chose a clinic for cancer treatment and a specialist who would monitor the patient throughout the therapy. Therefore, the development of cancer care in Germany is at the highest level. German doctors are among the most experienced in treating cancer.

New ways of treating bile duct cancer in Germany are constantly developing. That's why German oncologists mostly use only the old treatment methods. Another advantage of German clinics is the availability of medicines for all social strata, regardless of material income. The insurance system also works at a high level and with maximum efficiency. According to reviews, healthcare in Germany is considered one of the best in Europe.

Another benefit is modern German medical equipment, operating rooms, and diagnostic devices. As a result, hospitals are equipped according to the latest standards.

We offer you a list of leading German clinics for the treatment of bile duct cancer: 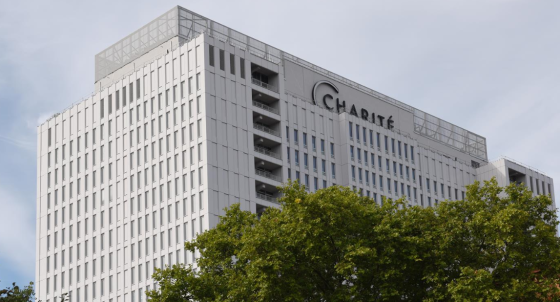 The hospital is one of the best scientific international rankings. In addition, it is recognized as the best medical institution for cancer radiotherapy treatment. Furthermore, high-quality brachytherapy, proton therapy, and chemotherapy are carried out in the hospital to treat a bile duct tumor. 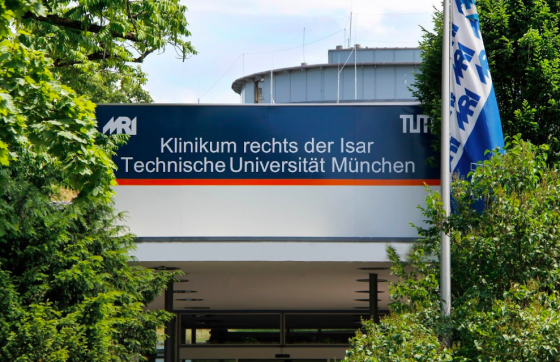 The clinic is the second largest in Munich, and its oncology department is recognized as a Comprehensive Cancer Center. Focal points in the treatment of bile duct cancer include targeted therapy and immunotherapy, as well as a combination of surgery, radio, and chemotherapy. In addition, image diagnostics are carried out at the highest level. 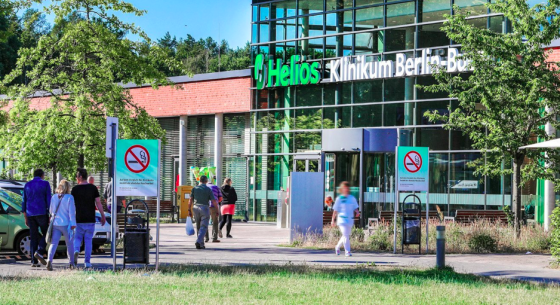 The clinic is the second largest in Munich, and its oncology department is recognized as a Comprehensive Cancer Center. Focal points in the treatment of bile duct cancer include targeted therapy and immunotherapy, as well as a combination of surgery, radio, and chemotherapy. In addition, image diagnostics are carried out at the highest level.

Countries where cholangiocarcinoma is effectively treated

How to start treatment?

The prognosis for bile ducts tumor is not the most favorable. These types of cancer are complicated to fight. But it always needs to remember that every disease is unique, as is the human body. The same kind of cancer can develop at different rates in different people. In addition, many individual factors can affect treatment.

There are no hopeless patients for AiroMedicals. On the contrary, new research in the field of immune and targeted therapy gives hope for the introduction of new methods of treatment.

The AiroMedical team offers you the best medical centers. To make an appointment for a consultation with a leading specialist or to get more detailed information about bile duct cancer treatment, leave a request on our website. Our patient consultant will contact you as soon as possible. We will select the most suitable option for the clinic and doctor and help solve organizational issues of the trip.